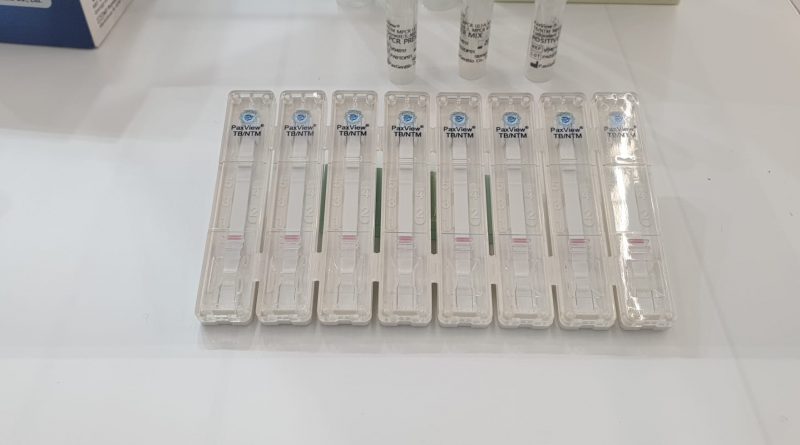 PaxView TB/NTM MPCR-ULFA Kit is a qualitative in vitro test for the detection of two Mycobacterium tuberculosis-specific genes—IS6110 and mtp40—and one Mycobacterium genus-specific gene—rpoB—in sputum or bronchoalveolar lavage (BAL) found in the human body using multiplex polymerase chain reaction (MPCR) and universal lateral flow assay (ULFA). This test is for professional use and is designed to aid in the diagnosis of MTB and/or NTM infection.

The PaxView TB/NTM MPCR-ULFA Kit adopts PaxGenBio’s proprietary technology that uses the patented universal probe linked to the PCR primer that amplifies a target gene from clinical samples and allows visual inspection of DNA-DNA hybridization between the universal probe at one end of the PCR products and their complementary sequence. When loaded onto the sample pad in a ULFA cartridge, the PCR products move over the nitrocellulose membrane along with running buffer and hybridize with complementary DNA fragments immobilized on specific regions of the nitrocellulose membrane. Finally, it is easy to visually verify the results within 10 minutes of adding the PCR products.

Tuberculosis (TB) remains a major global health problem, with around 10 million cases per year. Prompt and correct diagnosis is crucial to controlling TB. Conventional tests such as smear microscopy and culture examination have been used as the standard diagnostic method. However, molecular diagnostic tools to detect Mycobacterium tuberculosis (MTB) are very sensitive and rapid, so their use has recently expanded. This study aimed to evaluate the PaxView TB/NTM MPCR ULFA Kit (PaxView).

We, therefore, conclude that the PaxView kit could be useful for identifying MTB and NTM in resource-limited countries, as this procedure is much more cost-effective and convenient than real-time PCR or electrophoresis approaches. conventional gel.