Peptidoglycan is a biopolymer that is a major component of the cell walls of Gram-positive bacteria. Peptidoglycan consists of a carbohydrate backbone of alternating N-acetylglucosamine and N-acetylmuramic acid units and is modified with D- and L-amino acids. N-acetylmuramic acid residues crosslink oligopeptides. The terminal peptide is D-alanine although other amino acids are present as D-isomers. 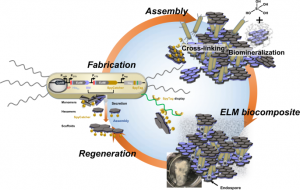 Bottomless glass bottle. The content is inside the inserted merged cone.